Now, is your time! 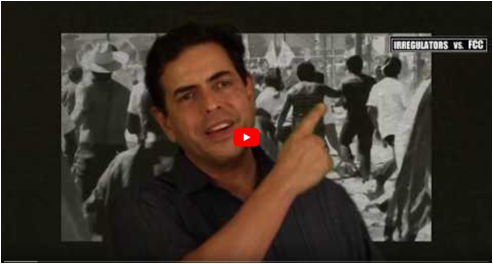 I break down the real on the recent Irregulators vs. FCC lawsuit filed to break-up the big tax and price scam being played on American Consumers.

Whoever you are, wherever you are, tax dodging by America’s largest telecommunications companies has already had, and will continue to have significant impact on your quality of life and your economic future. More on this in a minute. Not a single corporation has fully delivered on merger promises dating all the way back to 1995; making these giant cash rich Internet and phone companies liars at best – thieves at its very worst. We relied heavily on the fulfillment of promises in considering the merger pleas in the first place. So where is the enforcement? Where are the cops on the beat?

Regulators, state and federal legislators drinking the kool-aid served by telecommunication’s top lobbyist say, children and their families DO NOT need hard-wired fiber-optic connections to the home.  There is wireless technology.  “Who doesn’t have a cell phone these days,” they quip…

Teachers, principals, administrators, superintendents throughout California and the country have all bought into the idea that poor kids have no right to the technological resources available to their more affluent counter parts.

Teachers, principals, administrators, superintendents throughout California and the country have all bought into the idea that poor kids have no right to the technological resources available to their more affluent counter parts.

1. Why should low income children be relegated to inferior technology? AT&T and Verizon were already paid to deploy fiber-optic upgrades, via charges on all of our telephone bills. They owe us!

2. Children – literally – cannot do their homework on cell phone devices, and should not be expected to because that is not how America does business. Why are we training our youth in a methodology not based in real world scenario? Banks, Insurance, Transportation and Government all do business via hard-wired high-speed Internet access.

Children can’t type a paper the same as their peers who do have hard-wired, quality internet at home. They can’t do research the same and will not learn the same as children who do have the minimal tools needed at home to succeed academically. Today Internet at home is like books to read, reading glasses to see and a meal to eat. It is obligatory, not a luxury. Why are we allowing these kool-aid drinkers to sway us from providing our future economic engine the tools that absolutely must be in place?

What’s at Risk for Kids, our Country?

In Pomona Unified School District only 1 in 4 kids can read at grade level, according to Superintendent Martinez during a community meeting in 2018. Over the last 24 years AT&T, Verizon, Comcast and Charter (Internet Service Providers- ISP’s) committed to connecting low-income households to the rich resources available on-line, see Internet Essentials by Comcast. In so doing, children from all socio-economic walks would get access to tools that could literally help them close the achievement gap in a matter of 6 months. But these promises were not kept. Instead the ISP’s, in apparent collusion with the FCC, setup a system that would over-charge regular customers, deny access to low-income households, and essentially put on hold the build-out of 21st century infrastructure (fiber-optics). ISP’s dodged $100’s of millions in taxes through artificially contrived losses enabled by archaic accounting rules setup by the Federal Communications Commission 20 years ago, creating nothing short of the perfect storm for big telecommunication companies. This fleecing of American consumers at the expense of our economic future is a high crime, or at least should be. Children are precluded from accessing resources they need, having been relegated to wireless – inferior – alternatives, forced to their local Starbucks or McDonalds for connectivity. For children who can’t afford quality Internet at home, this has become an accepted and adopted school policy for many school districts throughout the country. The needs of our future economic prosperity are ignored. Profits have trumped integrity, logic and real world needs concerning our future.

Where are children who cannot read at grade level going to work? Who will be responsible for supporting them 10 – 20 years from now? By deferring the build-out of America’s fiber-optics we exacerbate the problem with the passing of every year, in the name of enriching massive corporations whose cash flow resources have become ungodly lucrative. For example, AT&T (other ISP’s as well, just not as good as AT&T) hosts the entire California legislature every year for a weekend at the beautiful Pebble Beach Hotel and Golf Resort.

Buying policy, policy-makers and regulators (the cops on the beat) with selective enforcement protocol, has emerged as a standard business protocol in the telecommunication industry.

Cell phone and wireless access is not a viable substitute for our children when compared to fiber-optic hard wired connection to the home. Adding to wireless’ unacceptability are untested health concerns of cell phone towers, cell phones and the introduction of 5G technology.

For More on This Issue visit: LAOrtega.com