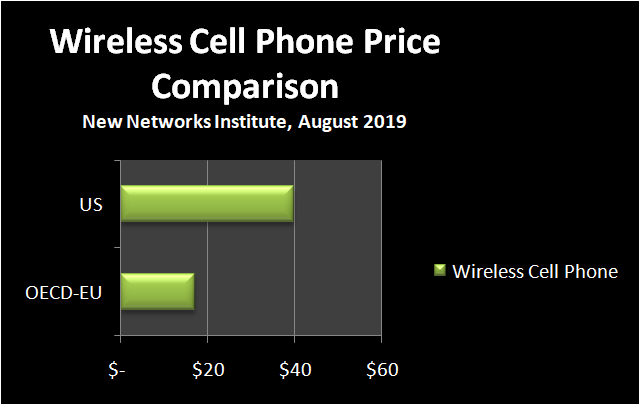 Scratching our head we look at our telephone bill, remarking: WTFraudulent-over-charges is going on here? We have known forever and a day the phone companies have been sticking it to us. Well the good news is our expert data guy from New Networks Institute’s can prove it, beyond a reasonable doubt. Yes ladies and gentlemen the phone companies are guilty as charged(or soon to be). The showdown begins September 10, 2019, where the FCC (Federal Communications Commission), America’s top cop in protecting consumer rights relative to the telecommunication industry, will have to respond to the first set of charges being brought by the Irregulators; a group of telecommunication industry experts headed by Mr. Bruce Kushnick, who led the charge in pulling the following data together.

Bruce conservatively calculates that we are paying $960 more annually, compared to our brothers and sisters in Europe; phony taxes and surcharges – permitted by the FCC – plop another $240 annually onto our WTFraudulent-overcharges bill.

Looked at through the lenses of ATT and Verizon: Every 1 million customers translates into $1 billion in politician-buying cream. Why cream you may ask? Because in Europe ATT and Verizon are already turning a profit on the prices they charge there. For every 1 million customers here in the US, the over-charges represent pure politician-buying cream to the tune of 1 billion dollars. Outrageous! How is it that our top cop on the beat, protecting consumer interests, allows this to happen? Not only is the FCC allowing it to happen, but are arguably colluding with the very industry they should be regulating. No way! How would they do that?!? Answer is simple. Regulators (politicians) line-up their next gig after their regulatory stint, by accommodating corporate interests.

Verizon, ATT, Century-link, Comcast, Charter, et al, appear to have at some level, colluded to normalize overcharges to US customers. Meanwhile as the price gouging of America continues, folks in Europe are paying $1,100 less annually. All the details can be found in Kushnick’s report, where he shows US customers pay as much as $200 more per month, a $2,400 price gouge, annually.

About 15 years ago Kushnick and company found that Verizon NY was illegally paying for wireless build-out and other non-related expenses using grandma’s telephone bill payments. Under our noses and in broad daylight, the FCC facilitated in Verizon’s cross-subsidizing pricing scheme that allowed them to skip-out on as much as $110 million in annual taxes. So the Irregulators are taking on the FCC, the rule makers who today represent mere cogs in the wheel of greed. The FCC’s charge is consumer protection, their current actions are representative of anything but…