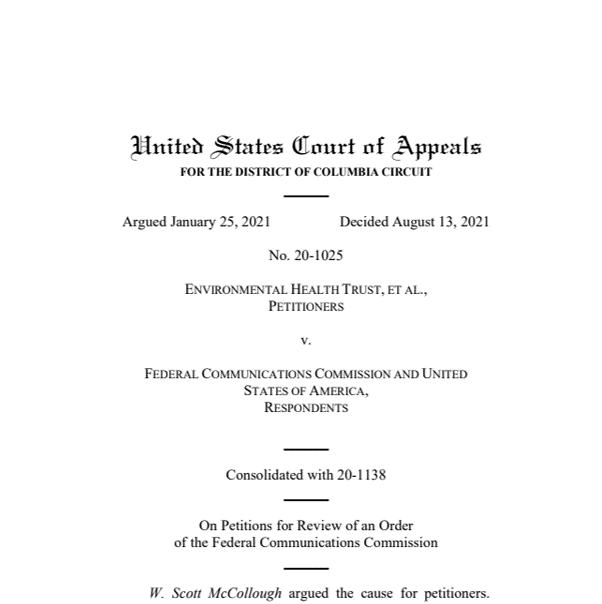 “Saying it is tough to go up against a trillion-dollar industry that captured our federal agencies is an understatement,” said Ellie Marks, president and founder of CA Brain Tumor Association in response to a landmark court decision issued August 13, 2021.  “The dam of denial has cracked,” says Ellie regarding the negative health effects of wireless radiation.  This landmark decision renders all existing and future state laws regarding wireless safety suspect.  Specifically, CA’s SB556 and AB537 make no sense until the FCC can establish legitimate safety standards for wireless technology on human health and environmental impacts.

The negative health impacts regarding wireless safety have been precluded from entering state and city discussions. The reason:

However, the court ruled in its decision that FCC Guidelines are “non-evidenced based”.  The FCC’s statement of poppycock (guidelines) can no longer be relied on and can now be challenged in discussions concerning wireless safety.  The FCC’s statement on wireless safety has had a haunting effect on all who have been harmed by RFR (radio frequency radiation).  Thousands of children have wrongfully been harmed in the name of this FCC unproven safety guideline.

Ellie has testified before congress and has been a national voice in educating leaders from across the country on the negative health effects of wireless radiation.  Ellie’s husband is the victim of cell phone radiation and is in his second bout with recovering from a brain tumor.  Story after story of children getting leukemia, brain cancer and other sicknesses caused by RFR are highlighted and then buried in the journals of facts to be forgotten.  No one wants our wireless devices to be harmful, including me.  All of us who use wireless devices wish them harmless, no doubt!  Unfortunately, the reality is over one thousand independent studies have concluded RFR is harmful.

Dr. Joel Moskowitz, Director for the Center for Family and Community Health at the School of Public Health, UC Berkeley said:

“…based on a meta-analysis of 46 case-control studies. Our main takeaway from the current review is that approximately 1,000 hours of lifetime cellphone use, or about 17 minutes per day over a 10-year period, is associated with a statistically significant 60% increase in brain cancer.”

None of us use our cell phones just 17 minutes per day.  On average most of us probably spend about 2 hours a day on our cell phones.  This means we (as adults) get 500 days of usage before we jump our risk of brain cancer to 60%: that’s less than two years’ worth of cell phone usage.  What about the children? The EWG (Environmental Working Group) study estimates the additional amount of radiation a child receives (due to a skull that is not yet fully developed) is between 200 – 400 times greater.  The younger a child is, the less developed their skull and the greater the risk they are to experiencing negative health impacts from RFR.

Scott McCullough, the attorney representing the plaintiffs in this landmark decision said, “this case was about uncovering the truth on regulatory agencies’ exclusive service to the wireless industry”; thus revealing a complete disregard to consumers, whom they (FCC and FDA) are charged to protect and serve.  Scott says the FCC’s statement on wireless safety can no longer be used.

This represents a huge blow to the wireless industry’s plans for complete and unfettered deployment of 5G.  There were over 11,000 pages of evidence submitted on behalf of the plaintiffs proving RFR harm.

“Excessive exposure to RF Radiation causes cancer,” reiterated David O. Carpenter in a conference call today.  Dr. Carpenter is Director of the Institute for Health and Environment, University at Albany and co-Editor of the 2012 Bio-Initiative Study.

Now is the time, mom and dad, guardian and/or grandparent.  Your children’s lives depend on you knowing the facts and how to mitigate RFR dangers.  Here are a few things you will need to lessen your children’s exposure to RFR: